A2 Milk: Why you should know more about it? 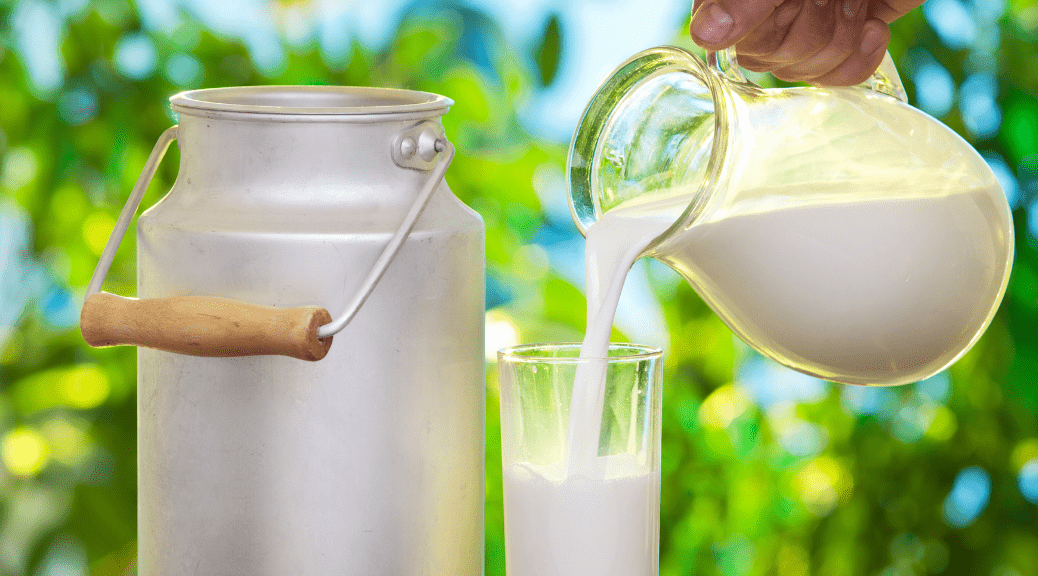 You might have heard about A2 milk and the claims that it is better than the regular milk (A1 milk) commonly available in the market. Consumer perceives such milk as better option than regular milk. Even A2 ghee too is perceived as healthier. But, what’s the reality? Here’s a fact-check read on A2 milk.

Take the example of A2 ghee; it is costlier. However, is it healthier too? Interestingly, any type of ghee made either from A2 or A1 milk are just fats. Any ghee does not contain protein, and it is mainly a protein BCM-7 present in regular milk that is under scrutiny for having some adverse health impacts. So, it is essential to be mindful when you are buying A2 milk products.

Behind the A2 milk controversy

The A2 milk controversy has its roots in the milk revolution which was launched in the 1970s in India. The milk revolution, also known as ‘operation flood’ and ‘white revolution’, was an Indian food security program. It was a move to boost the milk production to meet the nutritional requirements of the nation. The program was a huge success and is still considered to be one of the most accomplished food security programs in India. The program emphasized on the import of cattle breeds for higher yield. This eventually led to the side-lining of the Indian breeds.

Traditionally, the cows in the African and Asian continents produced A2 milk. But the switch from A2 to A1 cows to boost the production let to the milk consumption switch in India. However, on the other hand, many developed and developing nations including China, Australia, USA & UK have imported the Indian and African breeds and are switching to A2 milk consumption.

Recently, it has been found that the consumption of A1 milk (now commonly consumed in India) could be linked with neurological disorders heart diseases, diabetes. Also, some individuals cannot digest this type of milk and its regular intake can lead to bloating and irritable bowel syndrome. This is harmful and can lead to many intestinal disorders. On the other hand, A2 milk does not have beta-casein 1 and thus it’s consumption does not result in the disorders which can be caused by the consumption of A1 milk. 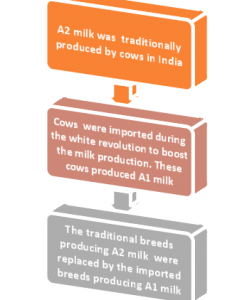 How is the composition of A1 milk different from A2 milk?

Let us begin by understanding that milk has beta casein protein in it. There are two types of variations of this protein i.e. A1 beta-casein and A2 beta-casein. The milk nomenclature is as per beta casein variant present in the milk. The difference is because of the change in the position of an amino acid. The A1 variant has histidine while A2 casein has proline.

Note that BCM-7’s absorption in its intact form into our bloodstream is not understood well. Many research studies couldn’t detect BCM-7 in the blood of healthy adults who drink cow’s milk, but some studies indicate that BCM-7 can be present in the bloodstream of infants who consumed cow milk. This predisposes the infants to the risk of developing type 1 diabetes in infants

The other side of the story

Although there are many studies which link consumption of A1 milk with some diseases, some experts argue that many Europeans and Americans have been consuming it for generations and it is safe for consumption. A systematic review by the European Food Safety Authority (EFSA) declares that no cause-and-effect relationship can be established between consumption of BCM- 7 (present in A1 milk) and the occurrence of acclaimed diseases. It is important to note that the conclusions of a systematic review are more reliable than a single study. The same article also quotes a NBAGR [ National Bureau of Genetic Resources] paper that, there are very few cattle with the A1 genes in India which are used for breeding and milking. As per this paper, the A1 milk and A2 milk are mixed when they are procured from small farmers. Even if the claims related to the A1 milk are true, the impact of A1 milk after being mixed with A2 milk is subdued and can cause little harm to human health.

Prices of the A2 milk products in India

How to assess if you are intolerant to A1 milk?

As mentioned before, A1 milk can not only cause comorbidities like diabetes, heart diseases etc but can also impact your gut health. You can follow these steps to understand whether you are intolerant to it:

FSSAI regulation on A1 and A2 Milk