“ I curse the day I was introduced to smoking by my peer group. Today at 30, just when I thought I am on a roller coaster ride I am diagnosed with lung cancer,” said Pradyut who is lying on the hospital bed since the past one month.Tobacco smoking is not cool and such stories give goose bumps. It is not only illiteracy, corruption or unemployment that is killing India today. Tobacco strikes early and strikes hard without giving life a second chance.

What is World No Tobacco Day

World No Tobacco Day is observed every year on May 31 by World Health Organisation (WHO) to highlight the health risks associated with tobacco use while advocating for effective policies to reduce tobacco consumption.

How is Consumer VOICE observing WNTD 2019?

VOICE is observing this day in partnered states of Goa, Madhya Pradesh, Haryana, Jharkhand Uttarakhand, Odisha, Tamil Nadu, Andhra Pradesh, Himachal Pradesh and Gujarat. The objective is to spread message about harmful effects of tobacco use and its impact and strict enforcement and implementation of COTPA 2003.

The World No Tobacco Day 2019 campaign will raise awareness on the:

The theme of WNTD 2019 is “Tobacco and Lung Health” 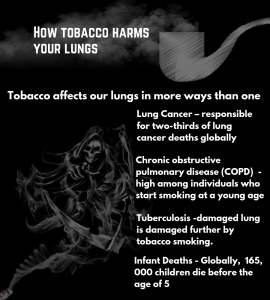 Tobacco consumption in India is one of the biggest menace that India battles among several other. However, 2016-2017 Global Adult Tobacco Survey (GATS) report shows a remarkable reduction of tobacco consumption from 34.6% in 2009-10 to 28.6% in 2016-17. But one cannot afford to relax.

How to control Tobacco Consumption

The small silver lining that the GATS report shows has been because of efforts of the government and NGOs working at the grass root level. India was among the first countries to ratify the WHO Framework Convention on Tobacco Control (FCTC) in 2004. Indian enacted comprehensive tobacco control legislation, entitled, “The Cigarette and Other Tobacco Products (Prohibition of Advertisement and Regulation of Trade and Commerce, Production, Supply and Distribution) Act, 2003” (COTPA). Under Section 6 (b) of COTPA, the sale of tobacco products is prohibited in an area within a radius of 100 yards of any educational institutions and mandatory signage in this regard should be displayed prominently near the main gate and on the boundary wall of the school institute.

One of the effective measures of stopping school children and minors from falling prey to tobacco smoking is implementation of vendor licensing through COTPA. The Cigarettes and Other Tobacco Products Act, 2003 (COTPA), specifically prohibits smoking in all public places, prohibition of direct and indirect advertisement, promotion and sponsorship of cigarettes and other tobacco products, prohibition of sale of cigarettes and other tobacco products to minors and within 100 yards of any educational institution, and display of health warning, including pictorial warning on ill effects of tobacco use on the packages of all tobacco products.

Consumer VOICE and Voluntary Health Association of India conducted a Big Tobacco Tiny Targets study to determine the extent of tobacco products being marketed and sold around schools in India. A total sample of 243 schools and 487 points of sale were closely surveyed during this study in these 20 cities.

Through the study, investigators observed 225 points of sale of tobacco products out of the 487 points surveyed around 243 schools in 20 cities across 6 states of India. Street vendors were the most common form of sellers at 56.6% of the 225 tobacco points of sale.