Mrs. M P Nirmala, IAS (Rtd), Chairperson, Tamil Nadu Child Rights Commission, shared her experience related to tobacco consumption among children. She said it is everyone’s responsibility to take a step forward to save lives of children of our country. Chitra Prasad, representative of the NSN Group of Schools in Chennai said, their schools have boards at the distance of  100 yards of the premises, stating tobacco-free zone but petty shops are selling tobacco products in that area.

Mrs. Nirmala Desikan, Chairperson Consumers Association of India disseminated the findings of survey done in the schools of the state. 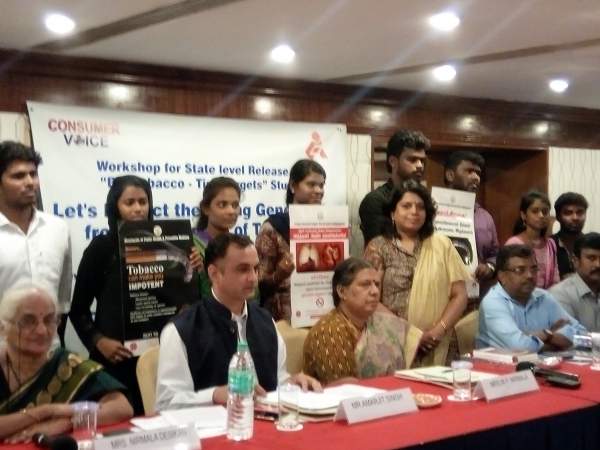 Dr A Somasundaram, Nodal Office Tobacco Control Cell, Chennai  present at the workshop spoke how the Public Health department is initiating action to such violations. He also mentioned about cases of violation of COTPA near school premises found in the survey report and assured to take strict action against the same.

The workshop was attended by 55 people including students, health experts, representative from Child Rights Commission, tobacco control officials, media, activists working on tobacco control and Consumer and Child right issues. The media provided wide coverage of the event including print , electronic and wire.

The recommendations of the study are: