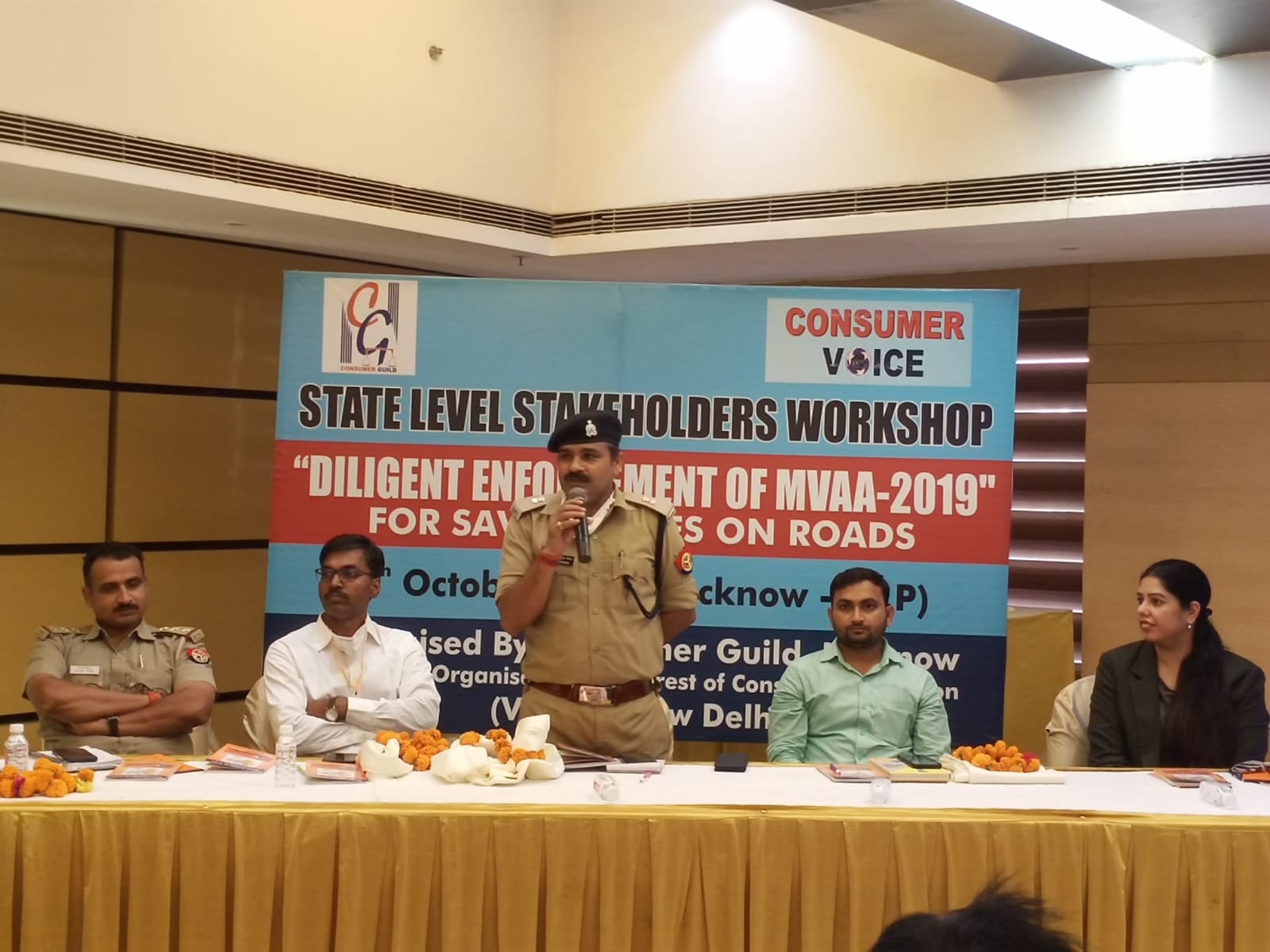 A state-level stakeholders consultation was organized in Lucknow, Uttar Pradesh on 8th October 2021  by Consumer Guild with Consumer VOICE to strengthen road safety to discuss “Diligent Enforcement Of MVAA 2019 For Saving Lives On Roads.” The key points that were discussed included road safety scenario, challenges, perceptions of common people towards MVAA2019, gaps identified and how road safety strengthening can be taken forward with collaborative efforts. 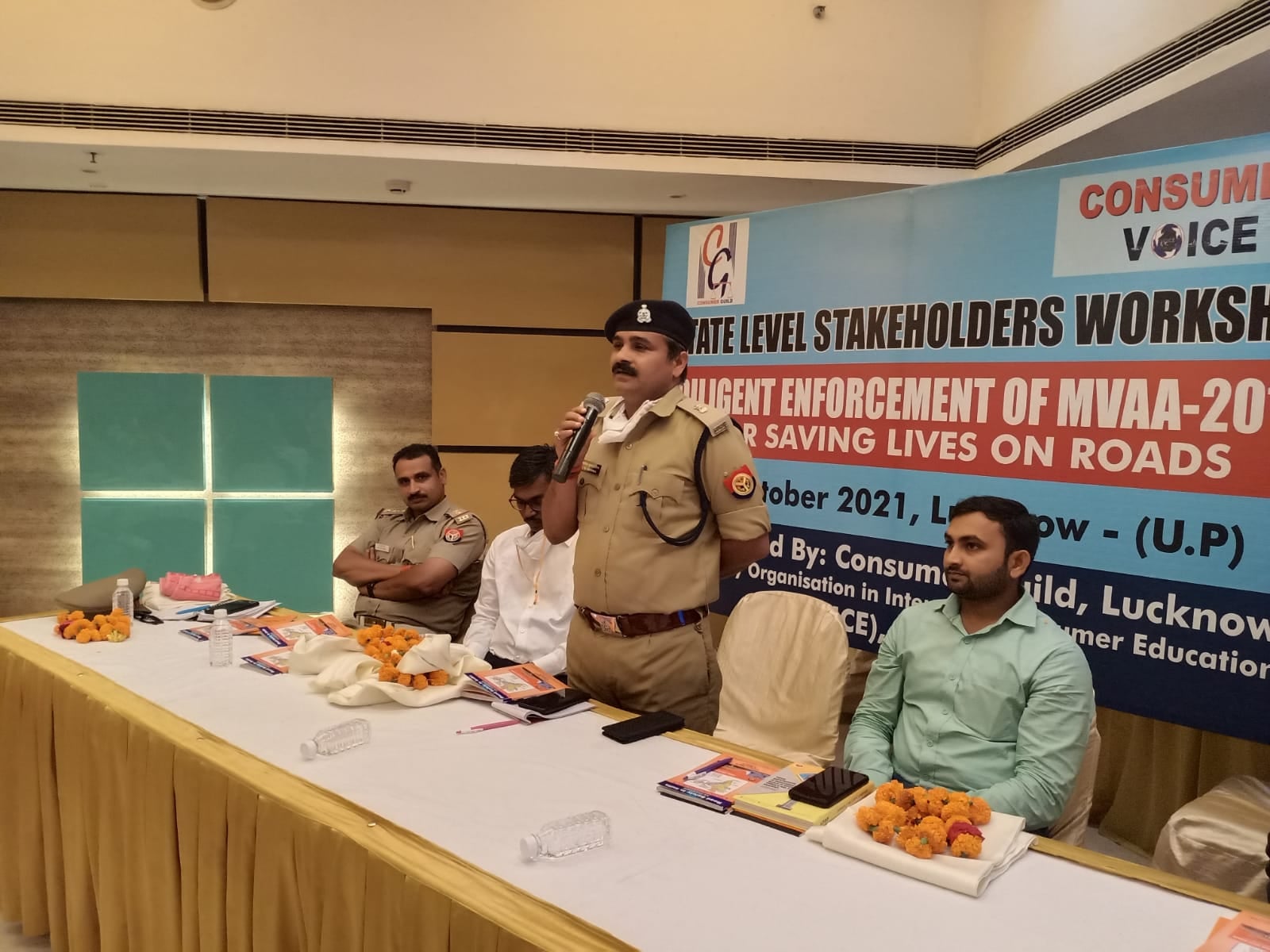 Transport Department – Highlighting the efforts made in the area of road safety, Shri Pushpsen Satyarthi, Deputy Transport Commissioner (Road Safety) said that “The transport department is working on road safety in UP to make state roads safer for the people. UP Government has implemented the MVAA 2019 and Road Safety Cell is coordinating with all the stakeholders for proper implementation of the Act. We are working for diligent enforcement of the Act, good Samaritan and several other important provisions which are included in Act to strengthen road safety.  U.P Transport department is in the process of a making a rule for non-motorized vehicles with coordination of Lucknow Nagar Nigam Lucknow (municipality department).

Police – Shri Raghvendra Kumar Mishra, Additional Commissioner Police, Lucknow, (Central) joined the workshop and reinforced public participation and awareness and said that this is the most important factor for effective implementation of MVAA 2019 besides several other provision to enhance road safety and to make police enforcement drives more effective to prevent casualties on roads. He also emphasized that it’s a collaborative responsibility and every citizen of the country is a stakeholder in road safety.

Medical Fraternity – Dr. Satish, Assistant Professor, King George Medical University, Lucknow shared the views on emergency care and golden hour after any accident. According to Dr. Satish those who are affected or killed are mostly people in their prime productive age. The highest burden of injuries and fatalities is borne disproportionately by poor people, as they are mostly pedestrians, cyclists, and passengers of buses and minibuses. “Golden hour” means the time period lasting one hour following a traumatic injury during which there is highest likelihood of preventing death by providing prompt medical care. He also discussed about provisions in current law regarding golden hour and how it is saving lives.

Shri Abhishek Shrivastava, advocate and chairperson of Consumer Guild presented the various provisions of the MVAA2019.

Ms. Rinki Sharma, Project Lead, Consumer VOICE said that the consultation mainly focused on the six vital pillars of road safety which are seen as the best global practice to reduce road casualties. Uttar Pradesh has taken lead in strengthening road safety and it’s high time to have a consultation processes with the concerned stakeholders to make the necessary diligent enforcement of the act and rules.