How the noodles are cooked varies from country to country. In Nigeria, people cook it and serve it with delectable ingredients while in countries like China, it is served in a cup with chopsticks and you usually have it with seafood.

Believe it or not, noodles are about 4000 years old. In 2002, a bowl of noodles was discovered in China that was 400 years old. The bowl was earthenware, and its contents were preserved miraculously three meters below the ground at an archaeological site situated in Lajia.

Though it is a fact that noodles originated in Asia, it is also true that the name noodle is from the German language. It is derived from a German word named “Nudel” that comes from “knödel,” which means dumpling.

Noodles are not just your go-to food for satiating hunger when you are too lazy or tired to cook. It is a fact that noodles were originated in Japan by a businessman, Momofuku Ando who wanted to help people battling hunger as a result of Japan’s defeat in World War 2. Instant noodles were first sold in 1958.

One of the most astonishing facts about instant noodles is that 270 million portions of instant noodles are eaten around the world every day. This data was revealed by the World Instant Noodles Association. China consumes about 46 billion packets of ramen on a yearly basis.

Japan has three museums that are dedicated to instant noodles. It is also a country where slurping noodles is considered polite.

When you slurp noodles noisily in Japan, it is a sign that you appreciate the food. In China, long noodles signify a long life, and when you cut up a strand, it is considered as unlucky.

The longest noodle of the world was more than 3 km long. It was created by a Chinese food company Xiangnian Food Co. Ltd. where staff sent 17 hours in creating the noodle by mixing basic ingredients like water, bread flour, and salt.

Instant noodles are the best-selling item at the Riker’s Prison in New York because prisoners can make it instantly with hot water at any time of day or night.

There is a movie about instant noodles that stars Brittany Murphy called The Ramen Girl. Celebrities also love noodles. Jackie Cruz, a popular TV star even admitted that she could live off ramen for the rest of her life.

Which of these facts about instant noodles impressed or shocked you? Let us know by commenting below! 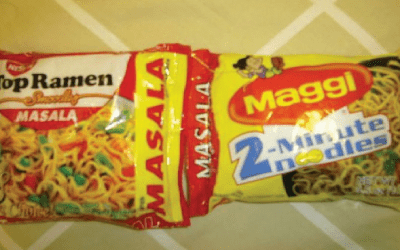 The popularity of instant noodles has come to the point where we almost count it as our essential grocery item. It meets our untimely hunger pangs...

END_OF_DOCUMENT_TOKEN_TO_BE_REPLACED

How good is your brand? The popularity of instant noodles has come to the point where we almost count it as our essential grocery item. It meets our...