At the start of the programme Dr Pradip Nandi, Director General briefly spoke about the magnitude of tobacco consumption in India and Madhya Pradesh and their health impacts, especially on youth. He stressed that despite Government of India issuing advisory to the states for the enforcement of the Cigarettes and Other Tobacco Products (Prohibition of Advertisement and Regulation of Trade and Commerce, Production, Supply and Distribution) Act, 2003, its implementation is poor.

The key findings of the survey which were done in Bhopal, Indore and Gwalior, were presented by Mr. Amarjeet Singh Panghal , Advisor Legal & Projects, Consumer VOICE:

The main recommendations of the study are as follows: 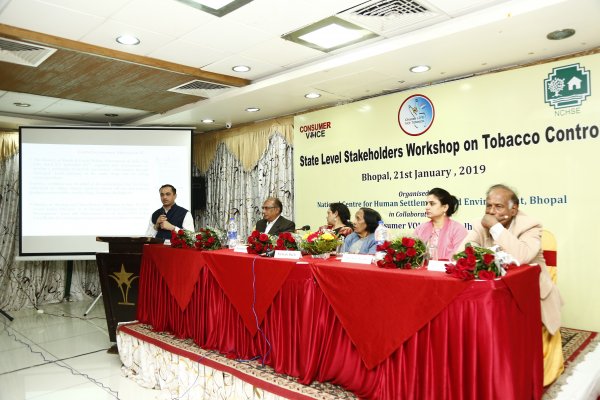 Shri Malika Nagar, Additional Commissioner, Bhopal Municipal Corporation (BMC) admitted that there is illegal selling of tobacco products especially in slum areas of Bhopal. She informed that BMC grants only limited licenses and is also taking several measures to restrict selling of tobacco products to the children/youth below the age of 18 years. Zonal Officers have been entrusted with the responsibility of monitoring of compliance of COTPA.

During the Panel Discussion on the needs and strategies for protecting young generation from the menace of tobacco, Dr. S.K. Saxena, Former CMHO & Civil Surgeon, Govt. of Madhya Pradesh stressed that there should be complete ban on production of tobacco as well strict enforcement of existing regulatory measures.

Shri Chandra Kant Naidu, Senior Journalist opined that ban of production or sale of tobacco product may not solve the growing problems related to tobacco consumption. He also stressed on the need for creating awareness among the youth and other stakeholders to make the restrictions on tobacco control meaningful.

During the discussion with the participants, it emerged that the advisory issued by the government of Madhya Pradesh for urban local bodies on 20th September 2018 is only for the urban areas. State Government has ignored the rural areas.