Dr. Ch. Divakar Babu, Secretary, Consumers Guidance Society in his introductory remarks has explained in brief about the overview of Tobacco Control in the State of Andhra Pradesh.  He stated that though the total per cent of people consuming tobacco and other allied products has come down from 28 per cent to 20 per cent but it is worrisome to notice that younger generation is being lured by tobacco manufacturers by their novel and deceptive surrogate ads and techniques and which needs to be curbed at the earliest. 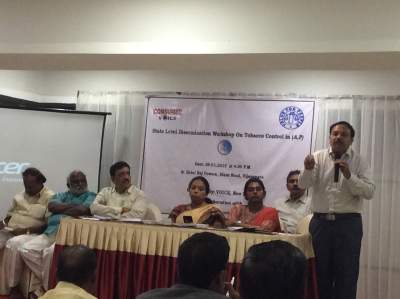 Sri Amarjeet Singh Panghal, Advisor, Legal had made a power point presentation about the key findings of the study on Tobacco Vendors in the state.  He expressed his concern over lax enforcement of COTPA due to multifarious reasons, which include lack of awareness among stakeholders, deceptive novel methods adopted by tobacco manufacturing companies to lure especially younger generation into consuming their products , lack of co-ordination in between enforcement agencies and want of any licensing regime for sale of Tobacco and allied products. Hence, he strongly advocated for compulsory license of tobacco vendors.

The key findings of survey are:

The inaugural session was followed by two panel discussions.  The first panel discussion was on the role of media in tobacco control.   M. Syam Sundar, Bureau chief, Hans India in his speech expressed his firm opinion that print and electronic media has a monumental role to play in promoting health and welfare of people.  Hence, he opined that media should disseminate authentic information about the ill-effects of consumption of tobacco products to the people in order to enable the latter to exercise their informed choices.

The experts dwelt at length on what needs to be done to protect younger generation from the menace of tobacco .The common theme advocated and articulated by the experts participating in the discussion was that compulsory vendor license is a pragmatic idea to be worth implemented to keep the younger generation from the influence of Tobacco Products.  The other important suggestions and recommendations made by the experts were;
(1)  Surrogate advertisement in any form should be strictly banned.

(2)  COTPA should be strictly implemented by the enforcement agencies

(3)  Awareness about the provisions of COTPA should be generated by designing and adopting multi-pronged approach.

(4)  Young generation should be properly sensitized about the harmful effects of Tobacco and allied products by formulating and designing specific plans towards children and youth.

(6)  Vendor licence for Tobacco Vendors should be seriously pursued for ensuring its implementation at the ground level. The positive signs made by the Municipal Administration in response to the advocacy efforts of Consumers Guidance Society by issuing a specific letter must be fully utilised to make co-ordinated efforts for achieving the same.

After the conclusion of two panel discussions, the floor was thrown open for comments and suggestions of the participants. Around 60 participants including health experts, municipal corporation officials, tobacco control activists,  media persons, CSOs  enthusiastically took part in the deliberations and gave their valuable suggestions.