The objective of the event was to sensitise stakeholders on tobacco control measures in Indore, Madhya Pradesh through vendor licensing.

Mr. Hemant Upadhyay, Advisor – Projects, Consumer VOICE presented the findings of a survey on selling of tobacco products in three cities, namely Bhopal, Indore and Gwalior, of Madhya Pradesh, with a special focus on findings of Indore.

The key findings of Indore are 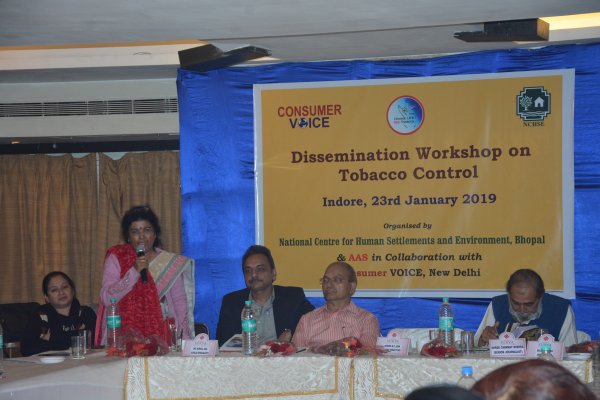 The main recommendations of the study are:

Shri Upadhyay also highlighted that there are several gaps in the existing law and without vendor licensing it is not possible to make the COTPA effective.

There was a panel discussion on the needs and strategies for protecting young generation from the menace of tobacco, Shri. B C Jain Joint Director, Social Justice Department, Dr S S Nayyar, Oncologist and Dr Nikhil Oza, Child Specialist shared their views.

Shri. Jain pointed out that usually human being takes to tobacco or drugs to hide their weakness and the poor become prey to addiction because they have least resistance power.

Dr Nayyar pointed out that there is a host of laws in India related to protection of human health, but their implementation is poor. In medical curriculum tobacco is not included. He advised that prevention of cancer due to tobacco use and de- addictions for tobacco among children are must.

Shri. Chinmay Mishra, senior journalist pointed out that due to lack of expertise among the journalists on technical matters like tobacco and cancer, they fail to project the issue properly. He stressed that there is need to think about the new way to discourage children to use tobacco products.

This was followed by open house discussion, when participants shared their experiences. Around 50 participants  including the experts, representatives from education depart, medical professionals, Civil Society organizations, community-based organizations, citizens of Indore attended the workshop. 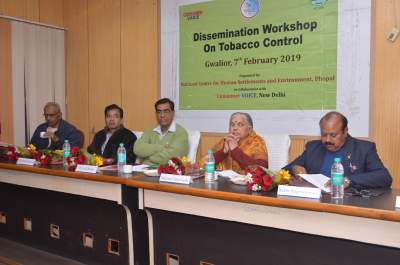 The  programme started with the inaugural message by  Dr Pradip Nandi, Director General who briefly spoke about the magnitude of tobacco consumption in India and Madhya Pradesh and their health impacts, especially on youth. He stressed that despite Government of India issuing advisory to the states for the enforcement of the Cigarettes and Other Tobacco Products (Prohibition of Advertisement and Regulation of Trade and Commerce, Production, Supply and Distribution) Act, 2003 (COTPA 2003), its implantation is poor.

The Findings of the study specific to Gwalior are as follows:

Dr Alok Purohit informed that multiple agencies are involved in implementation of COTPA 2003. He highlighted the need for creating awareness among students, especially of 7th Standards onwards to discourage them to take up tobacco. He stressed the need to educate the parents as well and that without support from Police it is very difficult to take action against the violators. He suggested that for COTPA to be made effective with respect to Section 6(a) & 6(b) it is necessary that Principal should see to it that the Tobacco Free Zone of 100 yard around educational institutions are marked properly, boards displaying warning in bold letters against violation of COTPA at the gate of Educational institutions are installed and regular warning to shops near educational institutions against selling of tobacco products are issued. Dr.  Dixit advised that mere displaying of warning is not enough.  There  is need for continuous monitoring against violation of COTPA 2003.

Dr Mridul Saxena informed that as per Government directive signage showing Smoke free zone  in all government buildings especially in Hospitals are being put up to discourage smoking in public places.

This was followed by an open house discussion, when participants shared their experiences. Besides the experts around 50 participants including representatives from education department, medical professionals, media ,Civil Society organizations, community based organizations, students and citizens of Gwalior participated in the workshop.  The event  received mass media coverage. 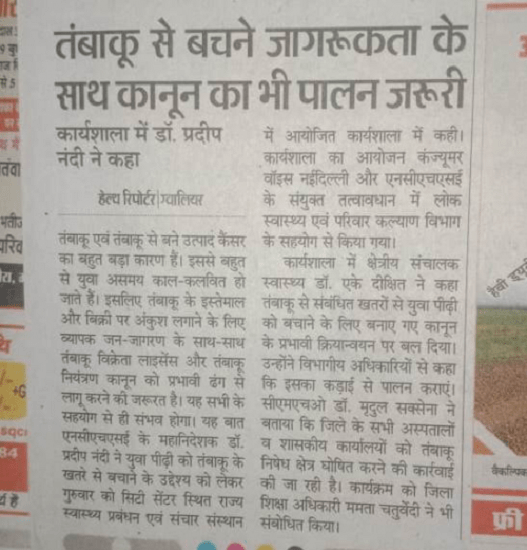 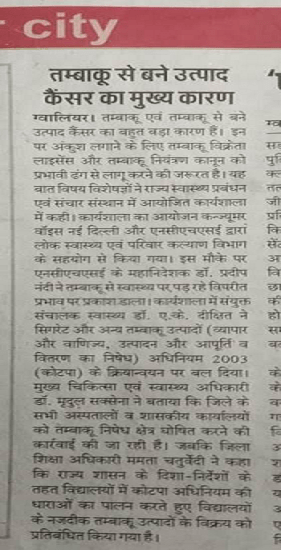