Tobacco products kill more than 8 million people every year which effectively means the future generation. With each passing day, tobacco and related industry is becoming smarter by the day. To target adolescents, the tobacco industry is coming up with several tricks and tactics. Some of these are: 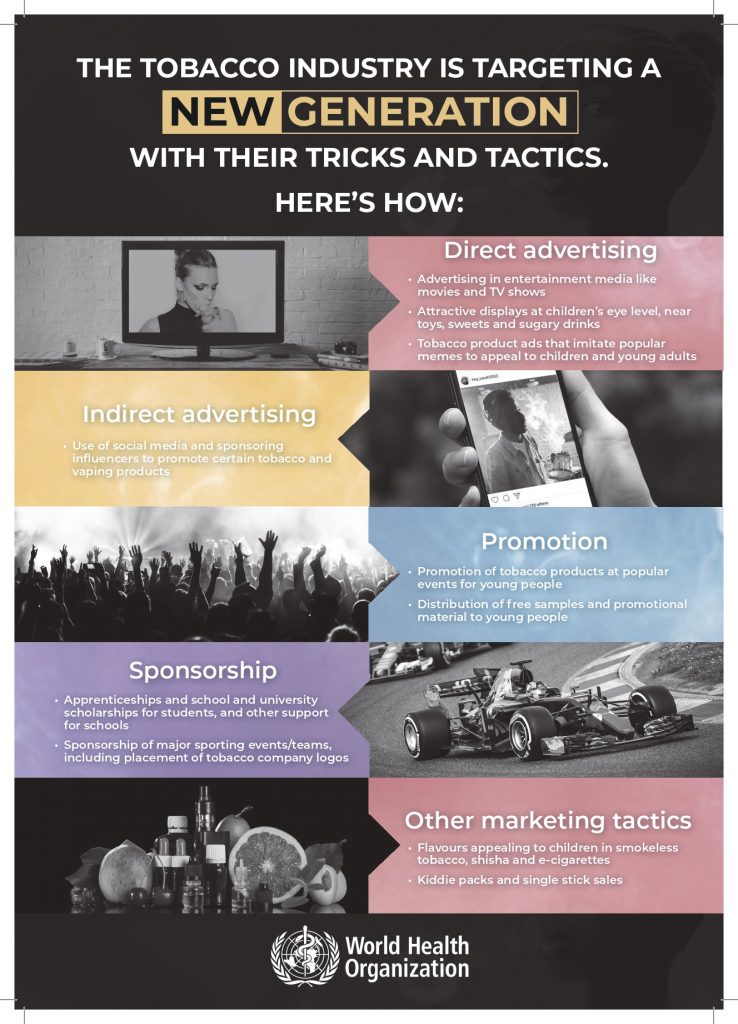 But in this World No Tobacco Day, WHO is planning to debunk myths and expose devious tactics employed by these industries by launching counter-marketing campaign. This year the theme of World No Tobacco Day 2020 campaign is “protecting youth from industry manipulation and preventing them from tobacco and nicotine use”, that aims to sensitize and make the youth aware about the harmful effects of tobacco use and expose the tactics employed by the industry to attract the youth. Through this campaign, WHO encourages everyone to gain knowledge, spread awareness and create a ‘tobacco-free generation’.

Tobacco consumption among the younger generation has its own set of problems. As per WHO, nearly 37% children in India initiate smoking before the age of 10 and 14.6% of 13-15 year old students in India use tobacco. If one goes deeper to understand the reason for increased smoking among children, it is easy availability of tobacco and tobacco products like cigarettes and bidis.

The states and cities in India which have issued vendor licensing orders using the power under their respective Municipal laws and regulations include Himachal Pradesh, Patna (Bihar), Howrah (West Bengal) Rajasthan and Lucknow (Uttar Pradesh), Ranchi (Jharkhand ) and recently Madhya Pradesh, and Assam

Consumer VOICE and Voluntary Health Association of India conducted a Big Tobacco Tiny Targets study to determine the extent of tobacco products being marketed and sold around schools in India. A total sample of 243 schools and 487 points of sale were closely surveyed during this study in these 20 cities. The objective of this survey was to ascertain whether the ban on selling tobacco products near educational institutions as per the Cigarettes and Other Tobacco Products Act (COTPA) is being enforced in cities across the country or not.

Also Read: Cigarette and tobacco shops can no longer sell chips and candies

As per Mr.Ashim Sanyal, Chief Operating Officer, Consumer VOICE “Vendors sell cigarettes and bidis via single sticks, making these products cheap and accessible to children and youth. Selling of such products outside of educational institutes attracts the youth to get addicted. This move will surely curtail the tobacco consumption, he added.