Are we doing enough to protect our children against road casualties ?

14th November is celebrated as Children’s Day but before we start celebrating the Day, let’s get down to some hard facts:

These are some of the disturbing numbers of child deaths of road crashes that MoRTH (Ministry for Road Transport and Highways) has revealed in its 2019 report. It is extremely sad and disheartening to see that our young ones being reduced to some mere numbers in government reports simply because of lack of empathy and seriousness towards child safety.

What is more disturbing is the manner in which these innocent lives have been lost. Most of these injuries and fatalities involve two wheelers and also includes rampantly riding without a helmet or non-adherence to  safety rules. These road crashes also include overcrowded school buses and pool cars which do not follow any safety measures. Children are the most vulnerable section of our society and road crashes involve emotional turmoil. It also results in considerable economic losses to the families as well as the nation as a whole.

The question that both the government and public need to ask on this Children’s Day is whether we are doing enough to keep our loved ones safe? Awareness on child safety is very low in the society and even if one does know, callousness and careless behavior looms large.

However, things started looking up after the MVAA 2019 was passed. It mandated a new provision that every child should be wearing a seatbelt or a Child Restraint System (CRS). The importance of a seatbelt for all is often undermined. Just to explain the science behind road crashes for not wearing seatbelts, experts explain that the occupants are also travelling at the same speed as that of the car and when the car come to sudden halt the impact causes serious injuries to the head and neck.  In such cases however, the CRS through the harness is more effective than a seat belt for very young children as they are specifically designed for them.

The new MVAA also provides provision safety for the pedestrians and non-motorized road users who are also children. Young children have been victims of rash and reckless driving even if they are not travelling in their cars or other transport. Stringent measures have also been introduced for drunken driving and over speeding in MVAA 19 and also for riding a 2 wheeler without a helmet. 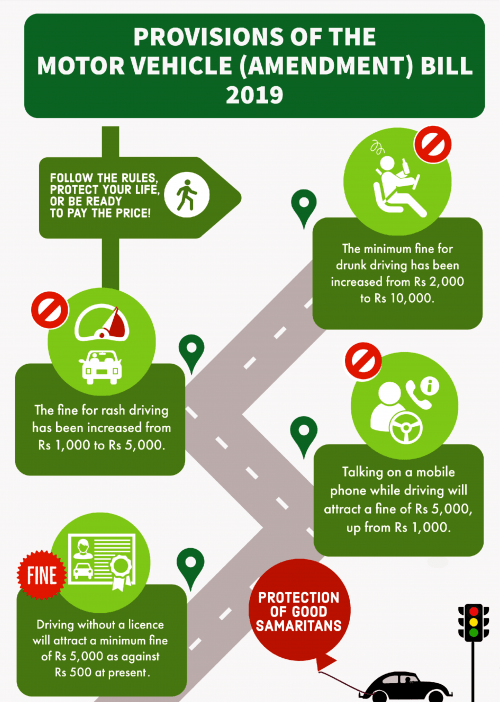 Issue of road safety and safety is taken seriously only when someone loses a loved one or is seriously injured in a car crash.  To combat road accidents and make roads and cars a safer place for children, the Centre has also proposed new safety measures for pillion riders up to 4 years of age like mandatory use of harness and helmet for children. This new rule will cover children up to the age of four years and with a maximum speed limit of 40km per hour. Violation of the rule will attract a penalty of Rs 1000 and a three-month suspension of the driver’s license. We all must support these provisions.

Speaking about MVAA (Motor Vehicle Amendment Act) and its implementation, Mr Ashim Sanyal, COO, Consumer VOICE, elaborates that “though the government on its part is taking right strides, the onus of safer roads lies on the society as a whole. Though MVAA ensures stricter penalties and punishment which should act as a deterrent for errant drivers and even car manufacturers, awareness among all road users to be disciplined is a must. Children specially should be repeatedly cautioned and the road safety curriculum should be seriously taken up in schools. This will help us save more young lives on Indian roads”.