“Life is not a Car Part”

The World Day of Remembrance for Road Traffic Victims (WDR) is commemorated on the third Sunday of November every year – to remember the many millions killed and injured on the world’s roads, together with their families, friends and many others who are also affected. This year’s slogan of World Day of Remembrance is ‘Life is not a Car Part’.Consumer VOICE considers Road Safety as an important safety issue for consumers. Considering this need we are educating consumers and spreading awareness on various road safety aspects through educational and outreach activities. The entire world experiences a number of road accidents and serious injuries. This annual global event represents a significant opportunity to call attention to the pathetic road safety situation in India.

This year Consumer VOICE along with its state partners organised various event on the occasion of WDR :

Media supported the events and provide wide coverage in the states.

Consumer Guild, Lucknow, Uttar Pradesh with support from Consumer VOICE, Delhi, organized “Shraddhanjali Sabha” to pay tribute to road traffic victims on the occasion of World Day of Remembrance on 17th Nov 2019. A peaceful walk started from Kakori By Pass to the entry point of Lucknow – Agra Express Highway, Lucknow Uttar Pradesh and demanded safer roads for all. They also demanded the State Government to strongly implement the new rules of MVA 2019.

More than 50 people participated in the peace walk, including representatives from NGOs, lawyers, students, doctors, Nursing Association, bankers, corporate sector representative, Ex-Army Welfare Federation. Many Victims /Family members joined the event. This year’s slogan of World Day of Remembrance –“Life is not car part” was prominently displayed on banners and placards. Early notification of MVAA was demanded by the participants. The walkathon was ended by two minutes silence (mourn) in the memory of road accident victims and candles were lighted in the remembrance of Road Traffic Victims. 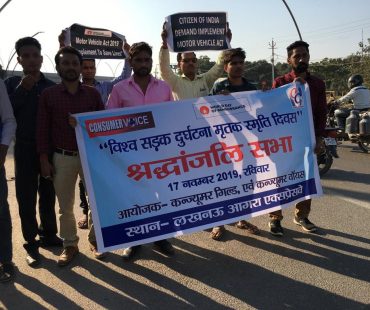 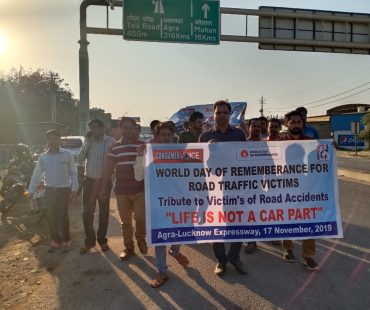 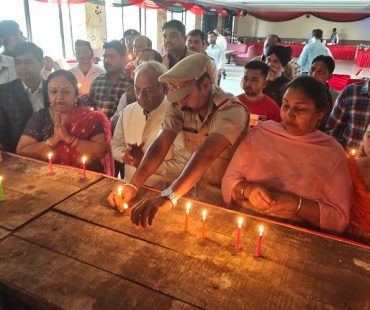 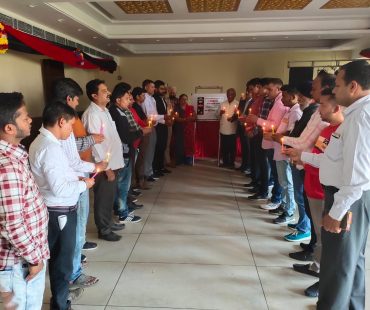 Consumers’ Legal Protection Forum, Assam, with support from Consumer VOICE, Delhi organized a peaceful walk from Guwahati Medical College Road, Bhangagarh on Sunday 17 November in association with Chakshu, Guwahati to gave tribute on the World Day of Remembrance for Road Traffic Victims and demanded safer roads for all. Dr. Karavi Barman, Principal-In-Charge, NEF Law College inaugurated the peace walk, students, residents ,representatives from NGOs /CSOs working on road safety and lawyers participated in the walk. It was a very successful event and media covered it well through print and online coverage. Strict Implementation of MVAA was demanded by the participants. The walkathon ended with a two-minute silence in the memory of road accident victims. 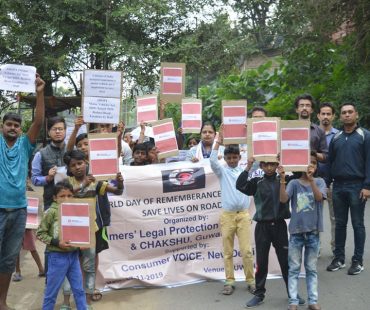 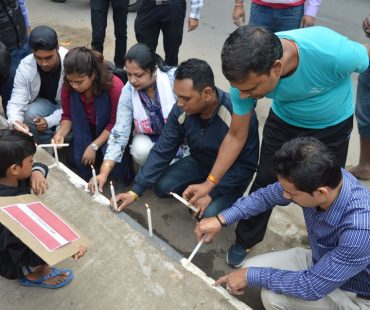 Bhartiya Manav Kalyan Samiti, Delhi with support from Consumer VOICE organized a peace walk at Mayur vihar in Delhi with participation from Local residents mainly parents of school going children. Citizen demanded for strict implementation of MVAA .A talk was also organized in which Shri S C Sharma of Bhartiya Manav Kalyan Samiti and Shri Hemant Upadhyay Consumer VOICE addressed the parents and children about road safety and main provisions of MVAA. The peace walk was ended by two minutes silence in the memory of road accident victims and candles were lighted in the remembrance of Road Traffic Victims. 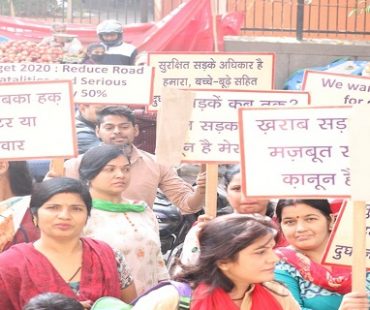 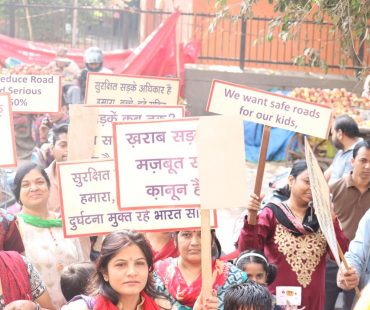 A Stakeholders Consultation on Strengthening Road Safety in the State of Madhya Pradesh organized by National Centre for Human Settlements & Environment (NCHSE), Bhopal with support from Consumer VOICE (New Delhi) on 19th Nov 2019. The objective of the event was to mark the World Day of Remembrance for Road Traffic Victims and to create awareness about the road safety to minimize road accidents. Shri Naresh Annotia, DSP,Traffic stressed that youth need to be disciplined and follow traffic rules for not only to reduce the chances of road accidents, but to help smooth flow of traffic and reduce vehicular pollution in cities. Shri Himanshu Tiwari, Subedar (Traffic) spoke at length about the magnitude of road accidents, their causes and the lives it takes every year in India and in Madhya Pradesh. He explained various precautionary measures and traffic signage which every motor vehicle driver should know and follow to remain safe.

During discussion it was highlighted that despite Motor Vehicle Amendment Act 2019 became effective from 1st September 2019 and several states have implemented it, Government of Madhya Pradesh is yet to take a decision to implement it. It was also highlighted that the new provisions of MVAA have been made with the view to discourage offences and that the increase in penalties are not only a means of deterrent but also not high in real term if one consider the price escalation during the 30 years. 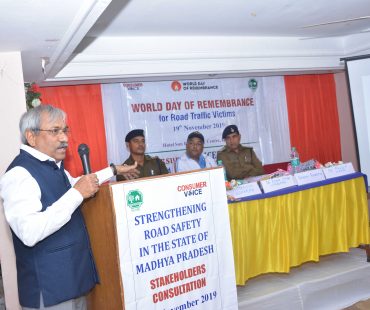 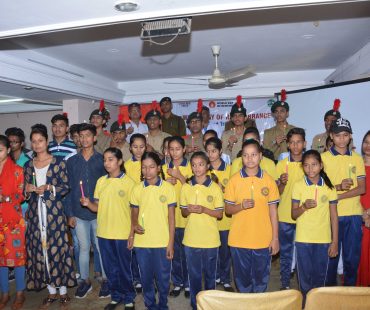