22 people died and 14 others were injured when an overcrowded minibus plunged into a 300 foot gorge in Ramban district in Jammu-Srinagar national highway.

Six persons were killed while 15 others were severely wounded in a road accident near Kurnool in Andhra Pradesh.

At least two persons were killed and 15 others injured when a bus carrying tourists from Uttar Pradesh dashed against a truck in Bhadrak district in Odisha.

The above news made headlines in the recent months in various cities in India. Road accidents in India and the world over are a major cause of death among all age groups especially among children aged 5-14 and young adults aged 15–29 years.

In 2017, more than 9,000 children died in road accidents in India comprising 6.4% of all the road users who died in road casualties.

As per report published in WHO, about 1.35 million people die each year on the world’s roads and between 20 and 50 million sustain non-fatal injuries.

In India, though the number of road accidents was down by 3.3% and the number of injuries by 4.8% in 2017 as compared to 2016,road traffic injuries still continue to be one of the leading causes of death, disabilities and hospitalization in the country. The report which was recently released by MoRTH (Ministry of Road and Traffic Highways), states that a total of 4,64,910 road accidents have been reported by States and Union Territories (UTs) in the calendar year 2017, claiming 1,47,913 lives and causing injuries to 4,70,975 persons.

In terms of road-user categories, the share of two-wheeler riders in total fatality has been highest (33%) in 2017. Pedestrian road-users comprise 13.8 percent of persons killed in road accidents during 2017.

Though several measures have been undertaken by various states and Union Territories, Tamil Nadu has recorded the highest number of road accidents in 2017, but the number of persons killed in road accident has been highest in Uttar Pradesh. The top 5 among the States which achieved reduction in number of accident are Tamil Nadu, Maharashtra, Gujarat, West Bengal and Karnataka. Among the States which recorded higher number of accidents in 2017 are Uttar Pradesh, Andhra Pradesh, Bihar, Nagaland and Odisha. 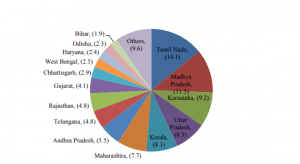 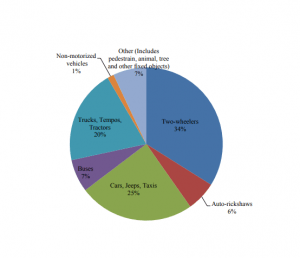 What can be done to minimise road accidents?

Before taking any measures, one needs to critically analyse the causes. Road accidents are result of various factors which can broadly be categorized into human errors, road condition/environment and vehicular condition.  Some of the factors responsible for road accidents are:

Another major cause of road accident is the lack of use of safety devices like helmets and seat belts are also responsible for road accidents. In 2017, a total of 48,746 road users on two-wheelers lost their lives to road accidents and out of this, 73.8% did not wear helmets.

One can therefore understand the importance of road safety and a delay in the passage of Motor Vehicle (Amendment) Bill 2017, which proposes a slew of measures like increasing of fines, is further compounding to the number of accidents every hour.

Some of the proposals in MVA Bill 2017

Some of the key provisions of the proposed bill include:

The bill has provision for protection of Good Samaritans. Those who come forward to help accident victims will be protected from civil or criminal liability. It will be optional for them to disclose their identity to the police or medical personnel.
Consumer VOICE along with its state partners are therefore urging the government to quickly pass the MVA Bill 2017 in this winter session in the Parliament so that all the states can implement the road safety measures.