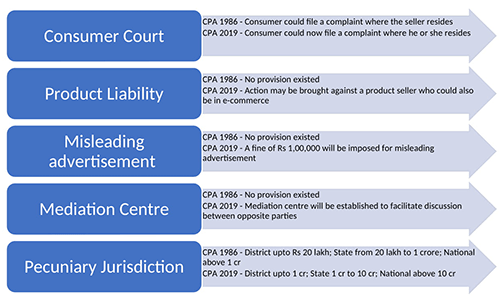 There have been numerous instances in the past where consumers have been victims of unfair trade practices. This Act addresses the menace of adulteration, by making manufacture, sale, storage of products mixed with adulterants punishable offences. The Act also states punishment for manufacturing for sale or for storing or selling or distributing or importing of spurious goods. A consumer may be imposed with a fine of up to INR 1,000,000 (One million rupees) on a manufacturer or an endorser, for a false or misleading advertisement and imprisonment for up to two years for a false or misleading advertisement

The new Act introduced the key concept of ‘product liability’, wherein action may be brought in against a product manufacturer, product service provider or product seller for any harm caused to the complainant on account of a defective product. It includes the seller who places an item for commercial purposes on the e-commerce platform as well.

For nearly 147 years Indian courts have upheld the validity of all terms of contracts if the contract was validly entered and have refused to judge the reasonableness of terms of contracts once parties have bound themselves to such contracts. However, the new Act classifies six contract terms as ‘unfair’. These cover terms such as

Widening of Jurisdiction of Consumer Courts

A big relief that this Act gives is the widening of jurisdiction of consumer courts. So, if your residential place is outside your cause of action, you can still file the case in your native place. The new Act raises the jurisdiction of District Consumer Court from existing Rs. twenty lacs to Rs. one crore, while State Commissions enhanced from can go beyond Rs 1 crore and the National Commission to over Rs 10 crores.

Setting up of Mediation Centres

The idea behind setting up of Mediation Centres is that willing parties in a dispute should discuss the dispute with an empanelled Mediator to find a mutually acceptable solution. Mediation Centers would be set up at the Central, State and District levels prescribed by respective state and central governments.

So, with the advent of this new Act, consumers are now the king!